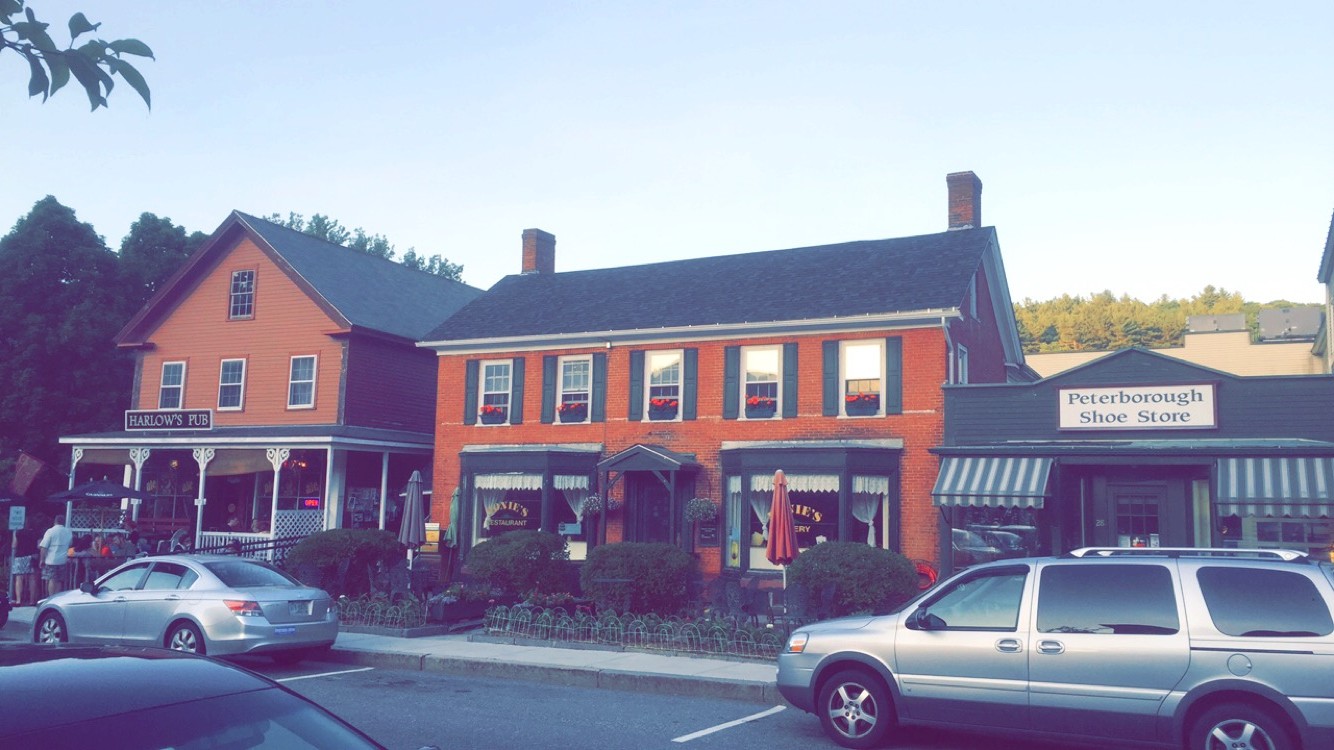 “Where are you visiting from?” the lady in the proverbial red dress at the bar asked. I almost said Florida.

“Upstate New York,” my voice rising as I spoke.

“Norwich, it’s in between Syracuse and Binghamton,” my eyebrows rising.

“Oh, I went to RIT,” she replied. I noticed Rochester finding its way into my life in all corners of the world and in many forms.

“Ain’t gonna work on Maggie’s farm no more,” the guitar rang out and stopped, rang out and stopped. His palm touching the strings slightly and rhythmically. “Aint gonna work on Maggie’s farm no more,” he sang. The bluegrass filled the bar as the bald man sang. It was this man’s job to kick things off. Clad with khaki shorts, strap up molded plastic sandals and a red faded tee shirt with a pocket he sang for us. The acoustics rang out in the night, a Wednesday night, in a small town in New Hampshire. I was in Peterborough.

“What gave me away?”

“What’s that?” she asked, as she looked up from her phone. She faced me and the stage from the bar.

“What gave me away? That I am from out of town?”

With a pause, “Oh you asked if there was music tonight. I wasn’t sure if you were just visiting or if you were new in town,”. She smiled. She was pretty, for a lady much older than me.

“Do you come here much?”

“Yes, I live in the next town over, it’s called Temple, it’s really small, even smaller than this,” she pointed down at the ground. “Eighteen hundred people.”

The next musician began to play. His keyboard in front of him, his voice softer than the man who sang before him. He sang two originals. The originals were like sliced white bread on a pink Floyd sandwich. He wore sunglasses on top of his buzz. His standard Joe style contrasted with the painted mural on the wall behind him. His originals were love songs and when he hit the notes, I couldn’t make out the words.

“Yes, I’ll have another switchback, thanks,” I responded to the bartender. My gaze fixated on her fire red hair. My bartender had a look to her, like fire. She appeared to be the type of person whose features contrast in such a way that you notice. I saw her eyes, her hair and her shawl-esque blue shirt.  This bar, Harlow’s, was a clear choice when I walked around the town. I had parked downtown earlier that evening and had made my way in a circle around downtown. This town was quaint. It was built by red brick buildings. Things seemed quite centralized. There was a square with shops and a circular street that took drivers downward and passed by the shops. The whole town was situated down in a small valley. Harlow’s seemed like the middle to me.

The middle of Harlow’s was its own eclectic world. Around the room there were people who fit the scene, and I thought that New Hampshire was perhaps a bit hipster, in a hiking type of way. The walls of this bar were covered in life and death. The walls housed post cards, memes and foreign money with sharpie notes written on them. There were newspaper clippings from the local news. There were bumper stickers, lanterns Buddha statues and street signs. There were skulls that seemed to dance and stare, wide eyed, over the shoulders of my red woman bartender. I saw art work and old photos and beer signs and antlers. There were pub signs and old bottles. Lamps, with real lamp shades. A telephone booth, which was red, of course. Décor of a real life, décor of existence.

“I am going to slide down,” I looked left to my red dress friend.

“Yes of course, come on down,” she said and I slide over one barstool. “I am Lisa,” and she stuck out her hand to meet mine.

I learned that Lisa was from Temple but she worked in Concord, in public policy. Her children had started a business, they were 20 and 17. They were baking artisanal, gluten free bread in an oven and selling it at farmer’s markets in the area. Best Brother’s Bakery, it was called. She was 50, maybe 55, or perhaps 45, somewhere in that range. She was voting for Hilary Clinton.

“I am a democrat in a republican dominated district,” she told me. She was running for New Hampshire state legislature. “But I am doing it to win so I have to find common ground with Republicans. We need to address taxes, our opioid problem. There are things that my neighbors and I can find common ground on no matter what our politics, I think that is how I can win.” She sipped her red wine and leaned in. A man with a harmonica set the background music. “Like eminent domain, when the pipes were laid down through town it brought far left environmentalists and local republicans together on an issue. Because we’re neighbors.” I pondered that, the power of this proximity she spoke of.

“I joke though, that as I have gotten older, I have gone so far left that I am on the right.” Genuine smiles and chuckles were shared.

She soon learned I was Republican and that I hated Trump. We’d both traveled and neither of us is afraid of Muslims, or anyone who is different. I said I would vote for Gary Johnson, and she asked if I might change my mind and vote for Hilary if I saw the polls deemed it necessary later in the election cycle. I said maybe, but I remembered and kept to myself that she was running in an unwinnable race. I think I would still cast my throw away vote for her.

I went to pay my tab. It was ten o’clock. I could have stayed there all night and drank, to be honest. But I had a big pitch the next morning. As oft is the case in the last moments, she had a question she’d saved. Not the ones about girlfriends and kids, the ones people ask when you know they like you, not because they’re nosy. She’d asked those already.

“Oh, and so then, you are just here then for tonight then for work,” her face controlled her surprise, but her question did not. People always think I am older than I am. She seemed disappointed, but maybe she was not. After all, on the timeline of life, we seemed to be far enough apart that we were neighbors.