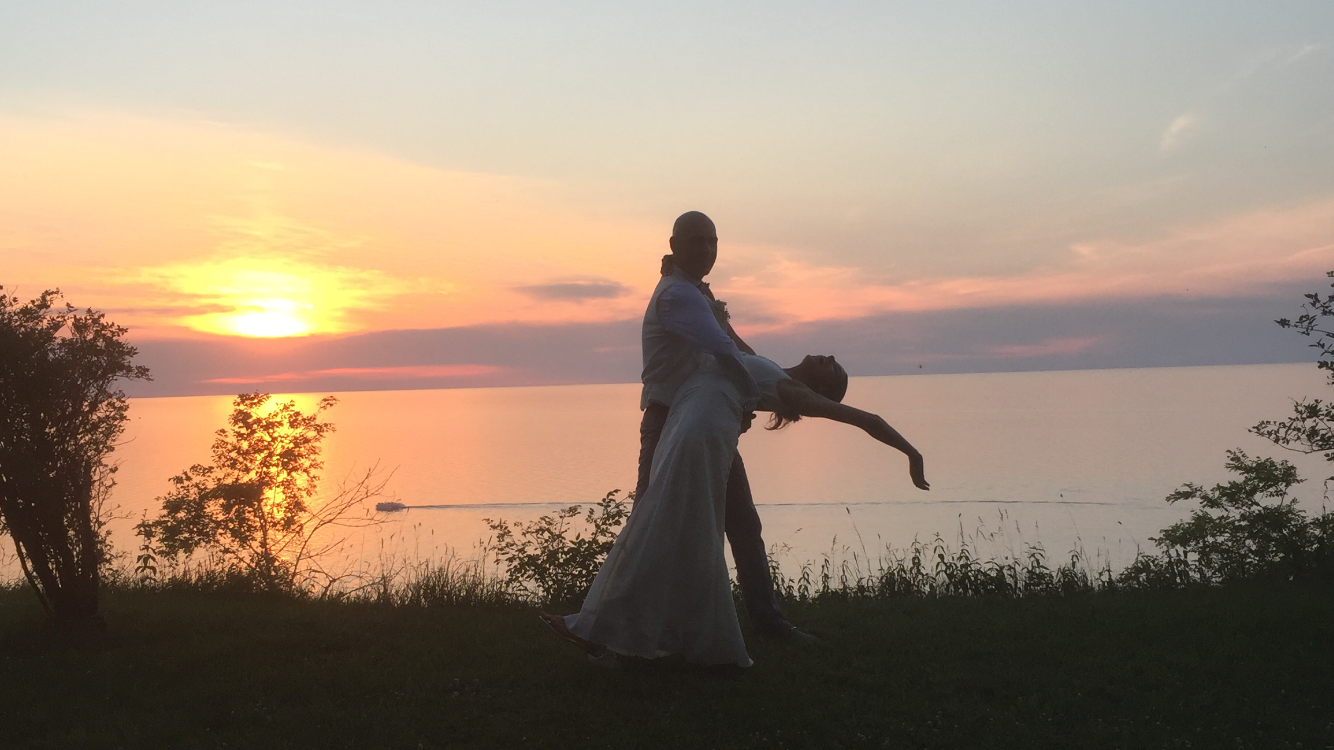 She was a wrapped in a parachute at the edge of a cliff on her wedding day. Beneath her, clear blue water of Lake Ontario lapped against the silty, sandy shoreline. You could see the green moss clearly layering the rocks below. The day was unseasonably warm. The breeze was cool and the clouds were sparse. It was June in Sodus Point, NY on a day that wrapped its arms around the world and pulled people in from all corners. It was her wedding day.

The parachute, like the cake and the food and the people, were fixtures from different walks of life. It was a quaint and dynamic blend.

Ketourah, wiped tears from her eyes as Eugene and Kendra clasped both hands in front of her. We had formed a semi-circle in front of the two as they stood in front of blue ribbon strung between two trees. iPhones snapped silent photos, the phones were perhaps the only indication of our existence in any relative point in the history of time. As the breeze offered relief, the jovial and teary crowd listened to their vows being read by their friend, Ketourah. She’d been ordained online and flown in from Hawaii as one of the loved few invited to participate in the celebration.

“Is that it?” Kendra smiled aloud, as Eugene caught her in his arms and Ketourah concluded the ceremony. The gathering was brief and also more intimate, and assuredly loving in nature.

Perhaps Charlie knew, better than any of us, that things were as they should be. You would be hard pressed to confine Charlie to formality. He is a poodle with a mind of his own. He was the greeter, the sniffer and the calm conductor of introductions. Charlie was the love that did not need formality, he was unwaveringly confident. Although, he did seem to pause, for just a moment, to entertain the idea of acknowledging the love he already knows.

“We want to acknowledge everyone from Aladdins,” Eugene grins and looks at Kendra before his gaze lands across the deck on the waitress from Aladdins. She is beeming with pride. “When we were thinking about who we wanted to cater this event, it was an obvious choice for us. Aladdins was a special place that we began going to when we started dating. I know they’ve never catered an event like this before. I think that Eleni was such a huge part of our relationship. We really enjoyed getting to know her and we loved the restaurant. It was a special place to us and special that they could be here today.”

Throughout the ceremony, I saw Eugene and Kendra recognize the people with whom they’ve shared smiles and intimate emotional relations. The types of relationships, both big and small, that sometimes only exist for a lifetime in unacknowledged obscurity. The nameless many defined by their role in our lives at a point and time and place. Human purpose so often gets defined by the convenience of language despite the loss of soul. Our paradigms, at some point, are drawn and quartered.

Clink, clink, clink went the glasses as we all turned to acknowledge a person rising for another toast. We had all been seated comfortably at tables on the deck. An enormous wrap around second story deck with a view of the lake.

“I don’t know how we became friends, since we had literally nothing in common,” charmed Maria with a smile and frankness that gave rise to a small roar of genuinely surprised laughter, the best kind of laughter. “I was this European girl who liked to drink, stay up late and smoke skinny cigarettes and she was so pure and innocent,” she encouraged us with this portrait of an acquaintance. “We liked to paint, that was it, we liked to paint, so we had that in common.” Maria, from Bulgaria, was on a one week break from fighting corruption in Ghana to join us for the occasion. She went on to read a beautiful email that Kendra had sent her shortly after she had started dating Eugene. It was a clear and concise note on being in love and telling a friend on the other end of the world.

“It’s beautiful here, in Upstate New York,” Maria would later tell me as we gazed into a pink sunset, sailboats gliding in the bay.

“Yes it is, in the summer anyway,” I said, as I thought about how today was a summer.