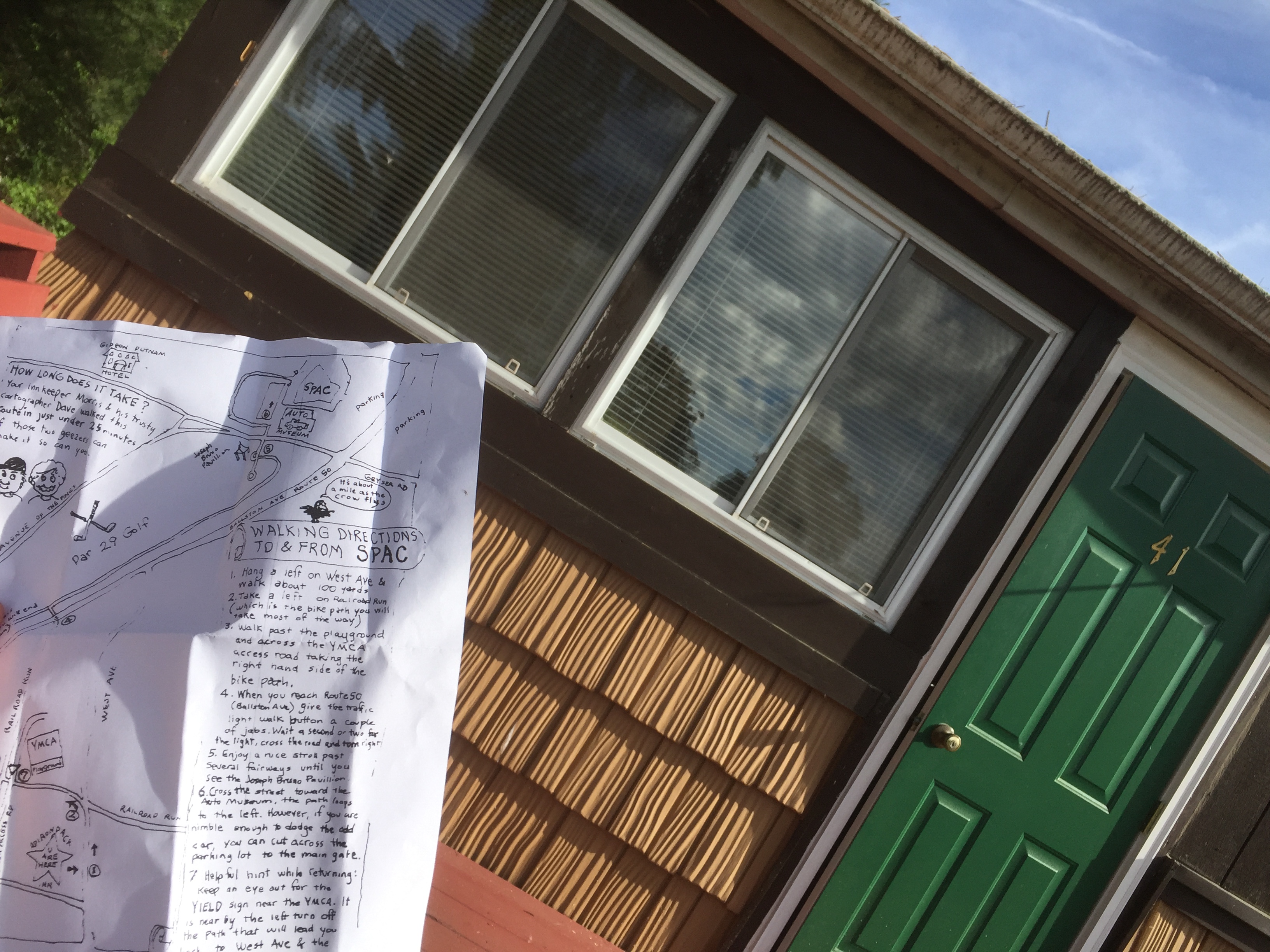 “We have our own cabin?” Robert exclaimed.

“Haha yeah I guess so, but we only have one bed still,” I responded.

So we pulled our bags from the trunk and walked through the small lawn in between two long buildings and pool in the middle of the Adirondack Inn. We had arrived. It was a Wednesday afternoon, on my mom’s 53rd birthday and Robert and I were in Saratoga Springs, NY for a Mumford and Sons concert.

“When I called yesterday they said that this place was the closest hotel to SPAC too,” I told Robert as I unfolded a piece of computer paper with directions printed on it. “I guess this is the way we go,” as I pointed to the hand drawn and reprinted map of the walking directions to SPAC.

As we walked up to our one bedroom, one bed cabin we were in awe. It was, in fact, awesome. The cabin had a nice front porch. It was in a row of four other such cabins on the back side of the property. Our porch faced the pool and was adjacent to a little clearing with shaded picnic tables. There were woods to our back.

As any good concert goers would, we unloaded the bags, took off our shirts and went out on the porch. The evening sun was still warm and the flood of warm, reddish light, filled in from the farm across the road and blanketed the cabin porches in heat.

Out of respect for Dave Martin, Robert’s Dad, we had purchased Coors Original, in the yellow cans at the Price Chopper down the street. As soon as we’d seen the 18 pack of Coors original, we knew we had to buy it. Especially before a concert, like I said, out of respect for Mr. Martin.

And so we drank our beer and left conversation on the wings of chords echoing from our iPhones that sat on a pine needle bench that held our empties.

“Y’all here for the concert?” a voice came from an older lady, probably 62, who was our next door neighbor for the night.

“Yes mam, we are. And what a beautiful dog you have,” I said as she let her collie out of her cabin and followed it to the shaded grassy area to the left of our porch.

“What about yourself? Are you here for the concert?” Robert asked.

“Oh yeah, I am a big concert goer! Whoo-hoo!” she said and laughed as she shook her hips. We all laughed. “No I am here for the horse show,” She responded. “Who’s the band?”

“Mumford and Sons, where are you here from for the horse show?” we asked. We weren’t surprised. Saratoga is a huge horse town, the track is there and there’s SPAC and a few more things that brings some real charm and delight to this town 24 miles north of Albany, NY.

“You are? We used to live in Florida!” Replied Robert. “You drive up?”

This lead us into a conversation about driving in NY versus Florida and the cops. How they catch you up here and wouldn’t touch you for doing less than 85 mph down there.

“You see ‘em behind every bush once you get up this way,” our neighbor said as she rounded up her dog. “Well you y’all enjoy the concert.”

“Holy cow it’s packed” Robert said after we’d made our way through the trail and had arrived at SPAC. We quickly realized that we couldn’t even see the stage from where we were on the lawn.

“Yeah, this is beyond sold out, wow” I responded. After a meeting of the minds and some scampering around asking employees if we could somehow get closer, we had a plan.

“Let’s grab two duecers of beer and tip toe our way down the lawn, we’ll pretend we are going to meet up with our friends.” We were brilliant.

“Yeah they are right there,” I would say, “I guess we should try to go this way. Excuse me.”

“Oh, Keegan, I see them, there he is in the striped shirt,” Robert would respond, “excuse me ma’am.”

And so after quite a bit of wiggling we arrived at a safe haven. We nodded at those around us and we seemed to be in a place we could stand for the show. And as luck would have it the band walked onto stage right as we arrived. They opened with Snake eyes and followed it up with Little Lion Man, two of my favorites, although I would say that the best performance of the night was when they played Believe. Although I am sure Robert would disagree. Yet, on the topic of Marcus Mumford’s talent as a musician, I am sure we found consensus.

Many songs and beers later we returned to the porch to await Dominoes. As luck would have it they made it with the pizza just before we fell asleep. We’ve slept in more comfortable beds less comfortably. So it was a night.