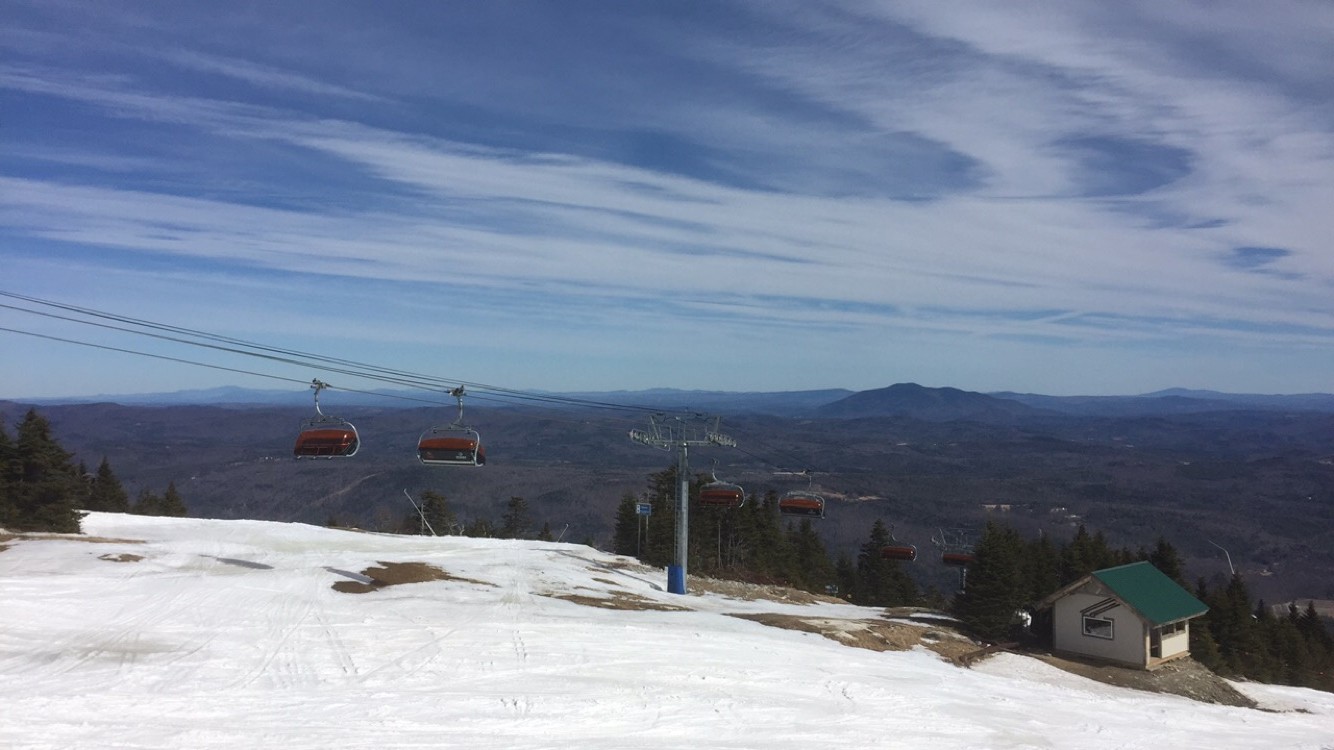 Okemo Mountain in the March of 2016 will be written about somewhere in the record books. Perhaps not the official record books, but certainly in at least one ski instructor’s version.

“Yeah, there’s a guy works the mountain up here that keeps track of the weather and he says this is the warmest winter in the last 30 years, ” the safety patrol guy says to my Dad. We’re stopped halfway down the trail called Tuckered Out. My Dad had stopped on this bend and struck up this conversation.

“Yeah, ” chuckles the ski patrol guy, “particularly when there’s barely a ski season to top it all off. Screw up national politics, that’s one thing, but ruin my ski season and now we’ve got big problems.”

They both laugh, as two men of the same age on a ski mountain in Vermont might. It’s a connection I know too well and also don’t know yet. I don’t talk to random people like my Dad, in the form of a vacationer, does. I didn’t really realize how much he did it, or how much I didn’t until this trip.

I began to notice that my Dad talks to everyone. He met ski instructors, members of safety patrol, parking garage attendants and bartenders. He can have a congenial conversation with just about anyone he sees. It comes natural and flows easily for him. I am a conversationalist, but sometimes I just choose not to engage. People react very well to my Dad, I notice.

The mountain is tough, real tough today. Just when you get in the flow of the slope you hit a wet patch and stick. You feel like you are about to fly out of your boots. It’s the type of torque that could tear a knee. But what’s worse is the rocks, because the rocks hurt. Its normal to fall during the course of some tough runs, but you don’t usually have to worry about landing on rocks. What I really don’t like though, is letting my skis scrape a rock. My body can heal, I don’t know if my skis could be unbroken. I’ve had these skis for a long time, my Dad bought them for me when I was 13. I don’t want any damage done to my skis today. I don’t know what tomorrow holds for weather.

“Keeg, I am going to do about one more run,” my dad says as we head down Tuckered Out again. Then, it was odd. I watched my dad fall three times on the way down Tuckered Out. We’d had some hard skiing that day, but I was still good for a couple runs. The mountain had my dad at that point and I realized he was 53 and I was 27. So I stayed on the slopes, and he went in at 3pm.

The solo chair lift ride up the mountain after my dad went in had me thinking about the days when I was first learning to ski. I was always tired and ready to go home before my Dad. We used to get up so early on Sundays and drive out to Greek Peak. We’d ski from 8am until the early afternoon, Dad was always the last one to want to leave. That was 10-15 years ago. Now, I am still out on the mountain by myself. The rocks look pretty from the lift.

“Thank god I brought these extra wind pants,” I said to Dad as we got on the lift. “Bet it’s not so stupid that I have these gloves now is it?”

“Nope, it’s not,” said Dad. “Looks they groomed everything, it’s really packed down.”

“Yeah, I wonder what the runs will be like this morning,” I wondered aloud.

As we exited the chair lift it was clear that today was going to be a different day. Slick and hard is the only way I can describe it. The mountain had changed overnight. The air had cooled to below freezing, they’d groomed the trails and packed the wet snow into ice. It was like ice skating, not skiing.

Then the snow started, and it came fast. We could barely see. Especially my Dad, who had to worry about his glasses fogging under his iced up goggles. I told him he should have worn his contacts like I did.

After a couple of hours, we stopped for soup at the top of the mountain. The snow flurries outside were beautiful, and fitting. When we emerged, it was a new mountain. The snow had left a nice fluff on a hard base. It was still dangerous, a fall hurt. It’s not like falling on snow. Falling on ice hurts, it is a rock hard surface.

As you might guess, I fell today. It hurt. Good thing we’d head to the hot tub later.

We climbed into the hot tub and I tried to talk to people like Dad did. We met a banker from upstate New York. Syracuse originally, and now he lives in Burlington, VT. He was at the mountain with his wife and his son. We met another man from Brooklyn and his friend who was from Philly.

The man from Brooklyn exited the hot tub shortly thereafter, to play with his sons and go outside in the pool.

“Yeah, I moved there after I got married, my wife is from there” said the guy from Philly, who was also from Brooklyn. He was about my age, and he was in the hot tub in red underwear, because he came on this trip last minute. So we talked and relaxed in the hot tub for a few minutes. We got into the ‘what do you dos’ and he said music. I asked if his friend was the musician, because his friend seemed like a musician. He said that his friend was indeed.

“Would I know any of his songs?” I asked.

“One Day? or King Without a Crown?”

A few minutes later I had the pleasure of saying nice to meet you, enjoy your Okemo ski vacation to Matisyahu. Then I headed back to the room to meet up with Dad.

“Get outta here! That’s who that was?” my Dad exclaimed as I played One Day for him.

“Sorry, only the bunny lift is open,” said the ski patrol lady, standing next to her snow mobile. “Or you can take the bus over to the other side of the mountain.”

“Well, I guess we can just do a few runs here and see if they open the other lift,” says my Dad turning to me.
The lift was frozen and we couldn’t access the mountain. So after about five underwhelming runs on the bunny hill, I was ready to go.

“No way,” I thought to myself.

Dad and I ended up being the first ones up the lift and having a morning full of amazing runs on an almost empty mountain on a Tuesday morning. I think we did Tuckered Out 4 different times, as it was well groomed, empty and a beautiful trail.

It seemed like 3 different mountains in 3 different times of the year during this trip. Lucky how, one more run turned into one more whole day of great runs.

“One Day, Ooonneee Dayyyyaayy” sang my Dad. “Think he’s here? Maybe he’ll hear me singing.” And so my Dad sang as we headed into the pool and hot tub area for a quick dip before the drive home. 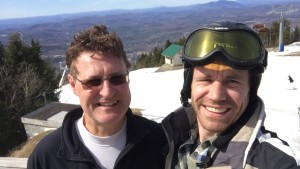