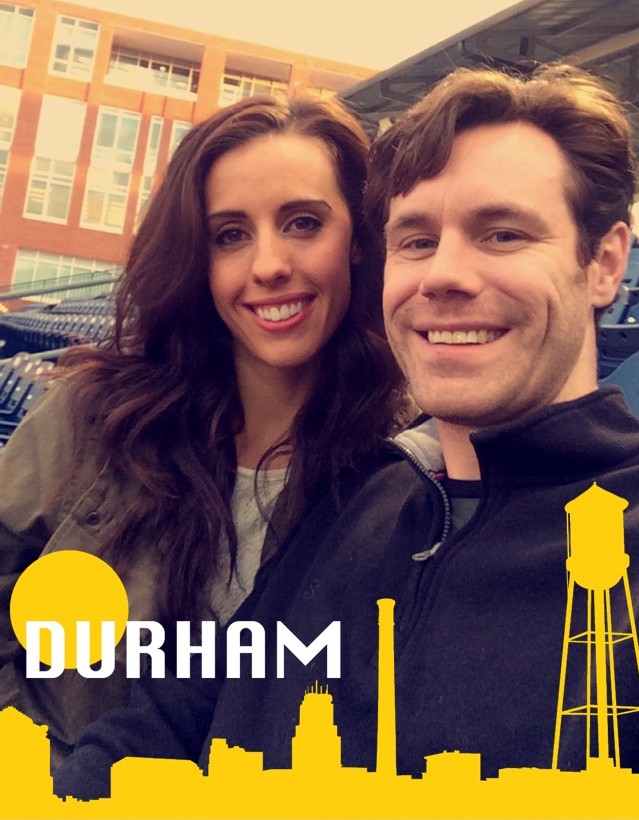 It may be transferable, this home, but that’s a fairly new development. Since when did home become portable? Since when did belonging become a circumstance of time?

It’s Friday, and it is our first day home. We didn’t plan for it to be home, but it was easily recognizable. It was in the coffee for me and in the walk for Brittany. It was in this first eclectic coffee shop, and in her seeing Toast.

“Come on, I want to go up closer and see inside,” she said. “Look at the line inside, the menu is just like I thought it would be,” in reference to Toast.

The Durham Bulls seem to be an extension of the attitude of the city. A staple that is a perpetual representation of the grit and history we encountered. Sometimes an athletic team can embody what is authentic and spirited.  Their emblem, then, more like a flag.

Meleata could not have been kinder. She was passing out pamphlets and seemed to be an ideal candidate for questioning.

“Excuse me, we’re thinking of moving here, would you mind telling me what this event is that you’re passing out pamphlets for?” I asked.

“Of course, it’s the largest independent documentary film festival in the country,” she replied. “It takes place right here in Durham.” Meleata worked for Lenovo in RTP and her husband was starting a tech company in the co-working spaces over at American Underground.

Around the corner, the creaks of an old garage door swinging up signaled the opening of the garage bar, where people could go for concerts. Food trucks lined the streets at night near the bars. Intellectuals sat outside bars and drank and talked. The farmers market buzzed downtown, selling everything from jewelry to turnips. I bought bison beef jerky. Brittany bought cucumbers.

Duke blue outfits trotted through the streets, as students ran around the corners. Revitalization was in the air. Transformation stared at you through Durham magazine, free and impressive sitting on the tables of local coffee shops and restaurants.

On the tips of tongues and in the eyes of individuals seemed a collective attitude, a collective spirit, a community. Raleigh’s kid brother had a chip on its shoulder. A chip that smelled like the decimation of a tobacco economy. A chip that looked intense like a young Michael Jordan, a North Carolina native, taking to the court in 1978, a year after he was cut from his high school basketball team. Durham smiled like she knew you were looking at her face to see if you could see the high crime rate reputation. She wanted you to like her, she’d be fine if you didn’t, but she’d be better off if you put your arm around her and told her what you saw when you looked at her.

Belonging has something to do with time and place. Place is place only so far as it exists at a point in time. That’s probably a lot like people. Durham’s eyes were intent, not on going somewhere, she knew where she stood. She was intent on discovering something. They were the eyes of a conductor, dutiful and inviting, but intent on continuing on their path. Her eyes offered invitation, one that might last insofar as she could tolerate the inherent vulnerability of offering an invitation.

Fluttering, as a stomach does before adventure, the corners of our eyes may have crinkled with a smile, if not for our narrowing irises in respect for the invitation. Like a drum beating, people swaying, lights dimming, beer sipping, lead singer walking to the mike, the guitar’s first note moment…we met Durham and clasped hands as she pulled us onboard.